A lot of in Helena Petrovna Blavatsky’s biography is enigmatic, unintelligible and mysterious. A lot of still unknown. Most of us will hardly get a chance to learn all the complexity of her fate and comprehend all the peculiarities of her traits, because to be able to do this we have to know her inner life and moreover to approach that level ourselves. The rich historical material could help us to understand some of her actions or bring up confusion about some other deeds. Time has a feature to smooth almost everything on its current and to hide the details, nevertheless it brings up new facts from time to time and makes us to return to what we have passed through and learned already, in order to expand our angle of view, enrich our understanding, to renew our vision of one or another fact.

That is what has happened to us, the two editors of a small but constantly growing group of people busy with gathering and publishing H.P.Blavatsky’s Collected Writings in Russian. These series are intended to include all the materials HPB’s hand had ever touched. By the will of fortune and from unexpected sources – as it usually comes – more and more details of HPB’s life are appearing, certain people are coming, circumstances and opportunities are revealing.

In another article we will tell the interesting story about finding the HPB’s translation into Russian the second volume of the Mystery of Edwin Drood by Charles Dickens and her translation of Olcott’s letters about spiritualism (both unpublished). In this one we are going to review such a noteworthy but yet a little-known part of HPB’s biography as her scrapbooks.

Scrapbooks appear to be voluminous books of about 25 cm wide and 35 cm long. Mostly they consist of cuttings from periodicals, but there are also some letters, addresses and cards. These materials are pasted onto blank pages of an album or scrapbook. Some pages are enriched with illustrations from newspapers, magazines and even color cards. There are many HPB handwriting notes to the articles. The articles and notes are generally in English, but there are also some Russian articles and a few in other languages.

According to Mary K. Neff who was the first one to make an index of the Scrapbooks originally there were 12 numbered albums and one unnumbered with Russian articles. When books became older and their condition became poor they were rebound and perhaps the new pages not included earlier for some reason and found later were included in new edition. Anyway in next edition there were 20 scrapbooks and in 1934 there were 24 of them. This number we have today.

Was it a leisure hobby of HPB to compile the scrapbooks? We think it was not. We would rather accept the idea that it was an example of work providing a good illustration of her mission, as a person who ought to give an impulse to a new stage of a human consciousness development. 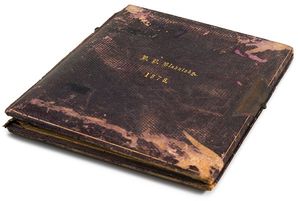 HPB was very devoted to her Masters and strove to do her best serving them to realize their plan. That’s why such a laborious and time-consuming work is hardly to be just an amusement for her own interest’s sake. In those 24 scrapbooks Helena Petrovna gathered unique documents of 1874-88, which reflect the condition of social thought of the time. The scrapbooks could be her diaries for that period. Did she have any regular handwritten ones we don’t know and there is now reference to such ones in known biography literature. The only hint at one which is available for a modern researcher is in Adyar Archives under the title “H. P. Blavatsky. 1878.” and it is a small notebook with just a couple of blank pages.

But why do people write their diaries? Isn’t it to impress in the paper their thoughts and observations, to highlight and save something important to them? During our work with Scrapbooks we had a strong belief that this was the purpose of compiling.

Even though there are no published articles about HPB’s Scrapbooks we could find, they were not left unnoticed. Several people at different times were working with them:

Nowadays the Scrapbooks are situated in The Theosophical Society Archives in Adyar (Chennai, India). Unfortunately they are in a bad condition. Wet and warm tropical climate of Bengal Bay doesn’t support long-term preserving of paper. That was the reason why archivists made an attempt to conserve this historical treasure by laminating the pages, but that made the situation even worse: paper became more fragile and dark.

Fallen apart albums were rebound several times and damaged pages were restored with a great care by special transparent ribbon without dangerous acid in its glue. This specific task was performed by Indian Conservation Institute (ICI, INTACH, Lucknow, U. P.), but in spite of the high professional level and really amazing results, the Scrapbooks are continuing to deteriorate.

Nevertheless at such a sad background there is a chance to rejoice because the current International President Tim Boyd intends to digitize Archives of the Society and provide the ability to research for a wide publicity worldwide without any restriction. The first step was made in January 2015 when Janet Kerschner (Archivist from TS in USA) together with Kusum Satapathy other three co-workers started bringing up the Archives in the working state. First of all they made sanitation of facilities. Archives rooms had been used just like a regular warehouse until that time. Humidity was not controlled, the temperature mode was not kept. The contents of the archives under such conditions came to the plight. After a month of an intense work, it took over a year more in order to welcome the first visitors. Since the beginning of the fall 2016, the Archives have become available for researchers.

To improve this situation an air-conditioner has been recently purchased. Realizing that this is not enough, the President has decided to construct a new special building for the Archives that would meet all the requirements of archival affairs. Such a complex and costly plan is likely to require more than one year, but preparatory work has already begun. 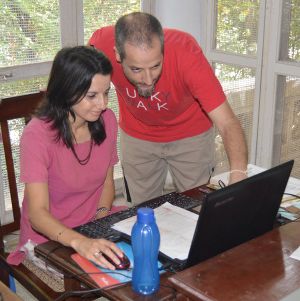 We were lucky to become the first official researchers in the re-opened Archives.

Arriving in Adyar at the end of October we met a warm welcome and kindly assistance. To our delight, we found two volunteers from Argentina, working on the digitization of the archive material. Laura Rodriguez came in October 2015 to help in the recovery effort. Diego Fernandes a skilful photographer, has been digitizing the old collection of the state archives since April 2016. On the very first day during the lunch in the dining room near the hotel Leadbeater Chambers, they came up and said that they were expecting us and ready to assist in our research. During the following 15 days we were lots of times thankful for such a gift. Without them our trip would not have been as fruitful. 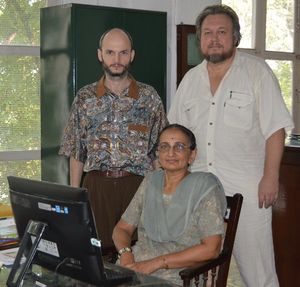 Next day there was another pleasant meeting with Jaishree Kannan, an archivist who has been working at Adyar Library for more than 20 years before this position. Jaishree did not just provide comprehensive assistance in our investigation by giving the requested materials but also offered something we did not know about, which could help us in research, that even prolonged her working day, so we would have the opportunity to spend more time in Archives.

In this small company (with Vedavathy as another valuable helper) we spent unforgettable 15 days studying H. P. Blavatsky’s heritage. There was so much material that it became soon obvious that we would have to return to the Archives more than once. During the stay we managed only to see the list of materials related to Helena Petrovna, to view part of it, update and convert from hardcopy to computer text a list of books from HPB’s personal library, and to update the index of Scrapbooks volumes 1 through 6.

It is obvious that HPB’s Scrapbooks are of great value, not only as a part of her biography, but as an illustration of the practical work of Great Brotherhood, which usually keeps its traces hidden for those who are not ready to devote their entire life to it. These albums as well as all the activities of Helena Petrovna show what the work of the Theosophist could be. Scrapbooks give us another practical example of it, another reason to think.

What was so interesting for HPB in each of the collected notes? What did she want to preserve and convey to us? What did she want to draw the attention of future generations to? Which thoughts did she want to arouse? These questions readers are invited to answer themselves. Our goal is to provide an opportunity to the reader to get acquainted with this aspect of HPB’s activity. Therefore, starting with the 2nd volume of H. P. Blavatsky’s Collected Writings in Russian, the translation of some Scrapbooks will be included. Therefore the number of HPB CW volumes will be increased, and the issue date will be moved a little bit further, but it’s worth it for sure.

P.S. We are grateful to Janet Kerschner, the archivist of American TS for responsiveness and valuable explanations.