Altruism and its component yajñā-sacrifice

Due to the divine nature under the condition of awakening, a person tends to the truth, to which he moves in many ways depending on the experience gained over a long series of incarnations. Having a wave nature, the human soul tries to tune in to the appropriate wave or frequency. This is similar to finding the right radio station, the more precise the setting, the clearer the sound. There are many radio stations, but everyone has the right to their own radio wave. When a person enters a flow of energy with a similar frequency, his energy increases, while contributing to the increase of the entire flow. It is good for a person if he is tuned to a wave of altruism, since it is a fundamental principle of the One Nature.

If you observe yourself, you will feel that changes are taking place within you all the time. How to stick to the right teaching and live the life of the soul, but not the body? How to practically apply spiritual truths in everyday life? This is achieved through a spirit of self-sacrifice or yajñā in Sanscrit. 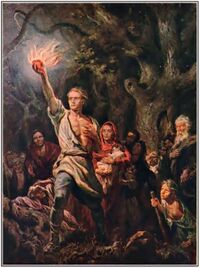 Here, in Russia, we were brought up in this spirit, inspired by such heroes as Danko from Maxim Gorky's story "Old Woman Izergil", who tore his heart out of his chest to shine people in the darkness, Pavel Korchagin from Nicholas Ostrovsky's novel “How the Steel Was Tempered”, who didn’t spare himself for the light future of the country and many other heroes.

Thanks to this upbringing, the Russian people endured the hardships of the Civil War and the Great Patriotic War, devastation, famine and the period of restoration of the national economy. At that time everyone lived like one soul.

What can we do for this in an age when materiality has swept Russia? What does the spirit of self-sacrifice mean now, and what is the sacrifice now?

The law of sacrifice or yajñā is the basis of manifestation in this world, as the ancient scriptures say. In all religions there is a concept of sacrifice. How is it understood exoterically and esoterically?

Illustration from “How the Steel Was Tempered” by N.Ostrovsky

"And Abel was a shepherd of sheep, and Cain was a farmer. After some time Cain brought a gift from the fruits of the earth to the Lord, and Abel also brought from the firstborn of his flock and from the fat thereof." (Genesis 4: 2-4)

Esoterically or from a kabalistic point of view in the interpretation of Ralston Skinner: “Cain was a divider (by measure) of the earth.” The words are אדמהעבד, ohed Adam-h. The verbal ohed, is to divide, to separate, to mark by long stripes or furrows; and these are the more radical meanings, the secondary derivation being to till, to cultivate. It is thus expressly said that Cain is a divider of the Adam-h, or of the 1445־, or 720… Cain’s function seems to be marked as of the quadrant division lines of the square, or of the cube, or he seems to represent the cross division lines. It has been shown that for calendar purposes, Cain, as 115, was the complement to make up the standard year of 360 days, or the celestial circle of 360 degrees… The narrative proceeds,

“And she again bare his brother Abel where the word brother is simply an obscuration of the sex of Abel (he being hermaphrodite), which in reality predominates in this glyph as female… Abel is הבל Hebel, and, adding the character values (3+2+5) equals 10, or the perfect one, showing that Abel and Cain are but phases of the same form—viz., of Jehovah… Cain, the rod, rose up and violated his brother. It was marriage, and the bloods that were shed were the דמיחתן, chatan dami, or bloods of the bride chamber; and they were to be found as part of the h-adam-h, or 3600— 0063. The Cain form of the garden was 144—441, and the bloods shed are 441, or דמי, or by counterpart 441—144, which simply shows that these bloods were, after all, but a means of division of the garden for astronomical and other purposes”.

Exoterically, the Torah commands to offer the burnt offering as follows:

"And in your new moons, you shall offer a burnt offering to the Lord: two young bulls, one ram, and seven lambs of the first year without blemish" (Num. 28: 11).

Exoterically: in Hebrew, the burnt offering "olah" עולה is derived from the verb "leolot" to rise or the noun "olam", world, universe, eternity. If you look at the letters of the word "olah", then you find the letter ה, that corresponds to Aries, וto Taurus, עto Capricorn and לto goblet, which drives the bulls. In the allegorical sense, this offering is a sacrifice of the lower ego’s passions.

What does Kabbalah tell us about sacrifices? The Zohar:

“249. Come and behold. In the flame that rises, there are two lights. One is the white light (khivra), which shines, and one is the light that connects to it: black (uchma) or blue (tichla). That white light, it is on the top, and rises by straight (mishor). And beneath it is that light blue or black, which is the throne (karsaya) for that white one.”

“263. And this is the secret of the sacrifice (carbana), for the smoke rises (tanana salik), awakens it, that blue light lights up, and when it lights up, it unites with white light, and the candle burns in unity one.”

"We have no other sacrifice but that which is to eliminate the evil side (evil principle) ot yetzi-ra." (Zohar III, 227)

The Bible refers to Abraham's sacrifice to God of his only son Isaac or Yitzhak, and here is what Zohar says about it in the chapter of Vaera:

“490. No doubt, we should say: about" Abraham "- that he had to connect with the [judgment] property (din), for there was no judgment in Abraham before that, and he was whole - mercy (hesed), and now the water came into the fire, hesed into the din. And Abraham was not perfect before that, and was exalted, having committed the din (judgment) and having corrected din in his place. For the illumination of Hochma is possible only in the left line. And therefore, before Abraham united with Isaac, i. e. left line, he was not perfect, for he did not have the glow of Hochma, and through the performance of the sacrifice he connected with Yitzhak and became glorified through him with the illumination of Hochma, becoming perfect”.

Exoterically and esoterically there are the four levels of understanding of the Torah, which are recorded in the acronym ParDeS (Garden of Eden):

Another example of the mystical understanding of the Torah is given by Charles Johnson in his article "Cain and Abel":

“Moses, (the Soul) led the Twelve Tribes (senses, organs, desire, egotism) from bondage in Egypt (sense-life) [Egypt in Hebrew Mitzraim, which literally means "between two gorges," that is, in slavery]. During the probation in the desert, these Twelve were superseded by Twelve Tribes who had never known bondage, (astral senses, etc.).

But the individual having gone so far, was to cease from individual life.

Moses saw the Land of Promise from afar, but himself entered not in. He died, and another entered in. The Self was annihilated; there was no longer Man, but God only”. 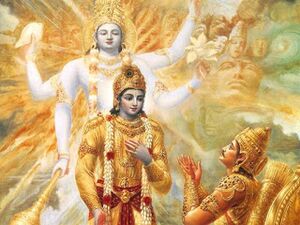 And what does the Bhagavad Gita tell about sacrifices? Who is Krsna? He is the Higher Self, Arjuna is the lower self that tries to follow instructions of his Higher Self. Kurukshetra is a battlefield or a sphere of struggle with the qualities of our lower nature. And who are the relatives and friends with whom Arjuna should fight? Those are the qualities of the lower nature. Krishna advises Arjuna to free himself from the influence of the qualities in order to receive complete liberation, and also proves to Arjuna that he must fight because he is a kshatra, that is, a warrior.

At the end of the second chapter, he says:

“That person, who gives up all material desires and lives free from a sense of greed, proprietorship, and egoism, attains perfect peace”.

In the fourth chapter there is such a verse:

What sacrifices does Krishna say about? About bloody ones? Theosophy can’t but condemn all kinds of animal sacrifices. The Great Buddha also condemned such non-religious activities.

"Atonement through blood has been too long in the way, and thus was universal truth sacrificed to the insane conceit of us little men." (The Secret Doctrine, II. p.699)

Yagna is completely forgotten as the principle of everyday life for mental, moral and bodily actions. Krishna says:

In the ninth chapter we find the higher teaching about the sacrifice:

If one offers to me with devotion a leaf, a flower, a fruit, or even water, I delightfully partake of that article offered with love by my devotee in pure consciousness.

By dedicating all your works to me, you will be freed from the bondage of good and bad results. With your mind attached to me through renunciation, you will be liberated and will reach me.

Bomandji Pestonji Vadya in his book "How to Live the Life" writes about these verses:

“What state of consciousness should one have to observe the simple-sounding but profound injunctions of Verses 26 to 28 of the Ninth Chapter?

The striver for Supreme Renunciation should offer every thought, word and deed to the Shining Self with-in. That Self is to receive, by the blessing of the Gracious Guru, the Light from "the star which is thy goal," says The Voice of the Silence; and H.P.B. explains in a footnote that " the star that burns overhead is 'the star of initiation. … The first step is in front of us, to be taken with knowledge and daring now, today. Leaves of small and passing acts, flowers of beautiful acts and fruits of creative acts should become the offerings to the Ishwara in man”.

The highest aspect of Yagna-Vidya is described by H.P.B. in Isis Unveiled (I. xliv):

"The Yagna exists as an invisible thing at all times; it is like the latent powerof electricity in an electrifying machine, requiring only the operation of a suitable apparatus in order to be elicited. It is supposed to extend from theAhavaniyaorsacrificial fire to the heavens, forming a bridge or ladder by means of which the sacrificer can communicate with the world of gods and spirits, and even ascend when alive to their abodes. This yajñā is again one of the forms of the Akasa, and the mystic word callingit into existence and pronounced mentally by the initiated Priest is the Lost Wordreceiving impulse through WILL-POWER”.

We find in New Testament: “The kingdom of heaven suffereth violence, and the violent take it by force”. If we do not do our best in seeking the truth and serving the great cause, but waiting for the results in the form of a reward or gratitude, then we are to wait for another life for entering the true path. We should perform all our actions like yajñā. It is necessary to be conscious in acting, that is living in the present, not be carried away in thoughts into the past or the future, being in the Eternal. Thus, while living consciously, we begin to see the aspect of Immortality that penetrates through the shells or klippot of the self.

In conclusion I offer you the lyrics of my song, called “Altruistic heart”. 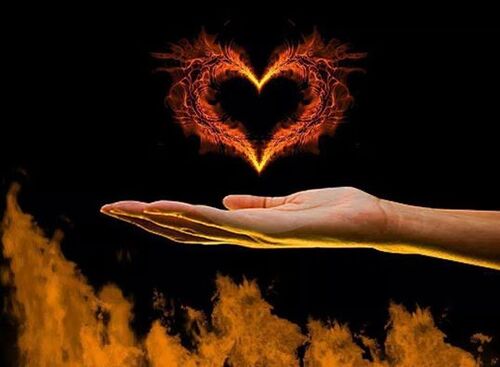