luckily for the poetic creature, suppressed by the blushing editor as being too vile for publication. One of the most modest of the paragraphs runs thus:

“Now, my advice to you, Frank, don’t crook your elbow too often; no use doubling up and squaring your fists again,” etc., etc. Oh, Katie King!

Remember, the above is addressed to the woman who pretends to have personated the spirit of whom R. D. Owen wrote thus: “I particularly noticed this evening the ease and harmony of her motions. In Naples, during five years, I frequented a circle famed for courtly demeanor; but never in the best-bred lady of rank accosting her visitors, have I seen Katie out-rivalled.” And further: “A well-known artist of Philadelphia, after examining Katie, said to me that he had seldom seen features exhibiting more classic beauty. ‘Her movements and bearing,’ he added, ‘are the very ideal of grace!’“

Compare for one moment this admiring description to the quotation from Holmes’ letter. Fancy an ideal of classic beauty and grace crooking her elbow in a lager beer saloon, and—judge for yourselves! 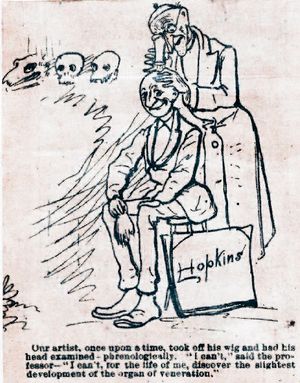 Our artist, once upon a time, took off his wig and had his head examined – phrenologically. "I can't", said the professor–"I can't, for the life of me, discover the slightest development of the organ of veneration."

On Sunday afternoon and evening, those of our readers who desire to see and hear Col. Olcott, will have an opportunity to do so, as he will speak on this day at Paine Hall, on Appleton Street, Boston. The subjects are interesting and instructive, dealing as they do with the topics that have lately agitated the thinkers in Spiritualism and are still calling out from them their best thoughts on the possibility of the truth of the new theories that are advanced. Col. Olcott’s subject in the afternoon will be, “Human Spirits and Elementaries.” In the evening, ’'Eastern Magic and Western Spiritualism.’ Present indications are that Col. Olcott will not speak again in this vicinity for many months at least. A word to the wise is sufficient.

Dr. Gardner announced that Col. Olcott’s subjects next Sunday would be '‘Human and Elementary Spirits” in the afternoon, and in the evening “Ancient Magic and Modern Spiritualism.” The following Sunday the platform will probably be occupied by Andrew Jackson Davis and Mary F. Davis.

The “Spirits” wrote anonymous letters to Dr. Gardiner and threatened to kill—Col. Olcott if he lectured against them. They did not kill him though, — guess didn’t know how, the sweet “angels”! . . .

Сol. H. S. Olcott has put his personal belief into a few simple paragraphs which are easily comprehended. He says:—

First: I believe in the existence of a First Cause, the source of all things visible and invisible.

Second: I believe in the doctrine of Evolution, and believe that it applies to both sides of the Universe—spirit and matter. It has produced man upon this sphere, and it follows him beyond the death of the body.

Third: I believe that in the course of this Evolution of man, successive forms of spiritual entities were brought into existence, just as there have been a countless succession of physical forms of plant and animal.

Fourth: I believe that, after the death of the physical body, man’s spirit survives; and that, under favoring conditions, he can communicate with those whom he has left behind. This manifestation may be made either through mediums or in other ways.

Fifth: I believe, as the result of study and of personal observation of practical experiments, that the human mind can control the occult forces of Nature, and subjugate all spiritual beings lower than himself in the scale of Evolution, just as he has natural dominion over ail the lower animals.

Sixth: I regard Modern Spiritualism, in its present form, as only a record of sporadic phenomena; which do not occur except under conditions not of our choosing, which cannot be controlled; and which are accompanied with so much that is contradictory and untruthful, that more investigation is necessary before we can be said to know anything definite about the laws of spiritual intercourse But, still I believe that, even under such unfavorable conditions as are now furnished us by our uninstructed mediums, disembodied spirits are often drawn into communication with us by the attraction of our intense love for them.

Seventh: I regard Mesmerism and Spiritualism as portions of a broader and a demonstrable science—that of Magic. This science was known to the ancients, has been practiced for countless ages, and is now practiced in the Orient

Eighth: 1 believe that the forces known as Animal Magnetism, Odyle, the magnet, psychic force, and the spiritual force, are all various manifestations of the same force—the Astral Light. This is the medium of which our spiritual bodies, the astral bodies of animals, and the vital force of plants, are portions; and the varying vibrations of which (under the name of “Ether,”) are severally designated as light, heat, electricity, and chemical action.

Ninth: While I believe that, often, human spirits have appeared to us in materialized form, more frequently a lower order of beings have appeared in the forms of persons who are called dead. Spiritualists have no means of distinguishing between these spiritual beings; Qabalists have, and need never make mistakes.

The Scientific Relations of the Shotgun

In the Scientific American of December 19, 1874, appeared an editorial article entitled “How to investigate Spiritualism,” which has been widely quoted in this country and abroad. It will be recalled to mind by the forcible language used in regard to the importance which would attach to spiritual phenomena in case their verity should be proven, after enlarging upon this branch of his topic, the author proceeded to define the tests which Science would regard as conclusive evidence of the materialization of spirit-forms:—

“The methods of Science,” said he, “are direct, logical, and on the shortest path to the truth; the man of Science always aims at the bull’s eye. The method of the skilled and intelligent detective is, without doubt, identical with the scientific. Cases somewhat similar to that of the fraud or no fraud of raps and materializations have often come up for decision ; an allusion to some of these throws a clear light on the present discussion. Our ancestors believed in ghosts, and they fired stones and bullets to test their faith. The proceeding was scientific, but suited only to an age ruder than ours. We warn the over-zealous scientist that, although a bullet could not harm a materialized spirit, no medium or his confederate is bullet-proof. An action for murder or man-slaughter would probably lie in a case wherein any one was killed in a scientific investigation or materialization. The well-known story of Fulton investigating the motive power of a perpetual motion by means of a hatchet, is a fine illustration of the application of the principles of Science. Lampblack, printer’s ink, and green paint have been slily smeared on the trumpets, ropes, etc., of the dark seance, and the truth was speedily declared in the unconscious ornamentation of the mediums lips or hands. And, best of all, strong <... >