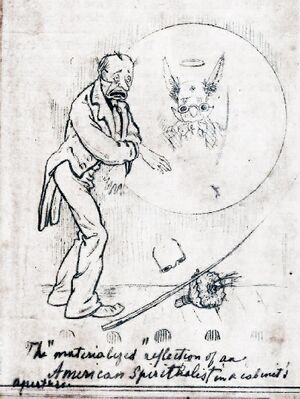 In America the Spiritual movement is at the present time in a disturbed, unhappy state, partly in consequence of two notorious mediums, who were condemned as unreliable in England, having successfully imposed upon some honorable people, and partly in consequence of some attacks made upon Spiritualism by a Dr. Beard, of New York, to whose utterances the daily papers there have given wide publicity. Orators from the United States, who have visited this country, have told us of eleven millions of Spiritualists who form one third of the total population of their native land, consequently, in the middle of the present depression, it is natural to ask what those alleged eleven millions of believers are doing to ward off the attacks of the enemy. Surely there is no lack of strength; for one-third of the population, by all voting together in opposition to the divided votes of the remaining two-thirds, could take the entire government of the nation into their hands, and command nearly every seat in the Congress at Washington. Madame Blavatsky, a most energetic Russian lady, now in the United States, has been fighting Dr. Beard most vigorously, and has certainly come off best from the encounter; but in an article in the Spiritual Scientist she piteously asks where all the millions of the American Spiritualists are, and why they are doing nothing in the middle of the present crisis. In Boston, the headquarters of the Spiritualists of the United States, there are internal divisions, and people of education and culture, have not banded together in such a way as to be able to give public expression to their views; consequently in Boston, and, indeed throughout the States, the uneducated portion of our body is that whose utterances are attracting the greatest share of public attention, and this is certainly not to the advantage of the movement. Mr. R. Cooper who is now in Boston, says that there is a great falling off in the attendance at Spiritualistic Sunday meetings in that town; although a much smaller hall is now used than formerly, it is not half filled. He adds: “The more respectable, well-to-do Spiritualists hold aloof altogether, preferring not to identify themselves with the movement in its present transitional state.” Thus it will be seen that in consequence of the most intelligent people keeping aloof, and the most uneducated being split up into small "societies having no influence. Spiritualism in America, is at present a rope of sand, so far as united action and power to resist attacks from outside are concerned. The championship of the interests of the cause in times of difficulty thus falls u[?]pon two or three heroic individuals, and a lady has been obliged single-handed, to do work which it was the duty of the whole movement to undertake. In England, the banding together of educated and non-quarrelsome Spiritualists has proved eminently successful; it has given a strength to the movement which it never possessed before, and it has given the members the power of appointing by vote those representatives in whom they have confidence, and who can command the respect of the outside public. Our brethren in America should do likewise, and form a National Organization. As Mr. Paul said at Marvlebone, there is nothing good or bad in organization itself, its function merely being to give strength, so that if organization in Spiritualism is bad, Spiritualism must be bad also; the evil cannot lie in the circumstance of individuals deciding in favor of union instead of disintegration. No doubt the eleven millions of American Spiritualists exist only as a brilliant figure of rhetoric. Nevertheless, the number of American Spiritualists is much greater than the number of Spiritualists in England, yet in this country the movement is probably strongest, in consequence of educated Spiritualists having resolved to pull together in amity and good will. That the whole of our body is not as yet working in unanimity, is not the fault of those of us who have raised the cry of anti-dissension, and invited all, high and low, to work unitedly on terms of equality, under a constitutional system resting upon te by ballot.―London Spiritualist

To the Editor of the Banner of Light:

Believe that the following narrative of recent spiritual occurrences in Philadelphia will be interesting to your readers, I respectfully ask its publication in the Banner.

About three weeks since an arrangement was made with Mrs. Jennie Holmes to give a series of six spiritual séances to a special circle of investigators, under such circumstances as were thought best calculated to secure harmony and the necessary conditions for spiritual manifestations. The circle comprised the following persons, all residents of Philadelphia except myself: Peter Crans, Esq., Mr. Thomas Watford, Mr. Samuel Rush, Mr. Abm. C. Dennis and wife, Dr. Adolph Fellger, Mr. Josiah Wood and wife, Miss Emily Wood, Mrs.―Lippincott, Mr. Samuel Tucker, Mr. F. B. Chase, and the writer. (Capt. J. F. Keffer, attended the three first séances. but not the three last.

The séances were held at the residence of Mr. Wood, at No. 1252 North 19th street, Philadelphia. Mrs. Holmes has for the past two months been compelled to give her séances unattended by Mr. Holmes, he being in very poor health and unable to leave his Vineland home. The first séance of the series was given on the evening of March 22d. The rooms used for the purpose were the parlor and adjoining sitting-room. The company assembled in the parlor each evening, and adjourned to the sitting-room to hold the circle. As the manifestations, which occurred in the dark circle, were similar on each of the six occasions, it will suffice to describe them generally, although there was a marked difference in the manner and order of their occurrence. Sometimes the power exerted was very great, and such as to cause fear of injury to the members of the circle. At other times the manifestations were less vigorous, but not less interesting and convincing of the presence and power of spirits.

In the dark circle Mrs. Holmes, the medium, sat in the room with us. On a table near her were placed various articles, such as tambourine rings, bells, a violin, guitar, &c. As soon as the circle was formed and the lights were put out the violin would be snatched from the table and be borne with great rapidity through the room from side to side, and from floor to ceiling, the strings of the instrument sounding as it seemed to fly through the air. A voice accompanied the instrument, which conversed with and addressed the persons present. This voice was very peculiar in its nature and individuality, entirely different from that of the medium, and once heard, could not be forgotten. It purported to be the materialized spirit voice of a young French Canadian sailor, called Richard, who is one of the principal spirit-guides of the medium. It was truly wonderful how even a materialized spirit-form could move through the room as this spirit did, bearing the violin, the guitar, or the tambourine rings with him, touching the members of the circle with them, in total darkness, with greater promptness and gentleness than it would be possible for any one in the physical body to do in open day. At request he would promptly touch the face, head or hands of those asking it, always so promptly, intelligently and correctly as to show that what was total darkness to those in the circle, was perfect light to the intelligence which was thus responding to their requests.

Several times Richard’s voice could be distinctly heard singing in concert with the circle, Mrs. Holmes singing at the same time in concert with us. At the fourth séance of the series, soon after the light was extinguished, Richard went up to Miss Emily Wood and said, “Your boy wants you, why don’t you go to him?” We then beard the little son of Mr. Wood, two years old, crying up-stairs. Richard then said, “Bring him down here.” Miss Wood did as requested, but was some minutes in doing so. Until she returned to the room, the manifestations ceased. As soon as she was seated, with the child in her lap, the sounds of the musical instruments were resumed, and floated around the room with unusual vigor. While this was going on. Miss Wood exclaimed, “He has gone; they have taken the child.” Not knowing what had occurred or what to do, we, waited in breathless suspense and apprehension for the child’s safety. Not a sound could be heard to denote the whereabouts of the child. It was only when Mrs. Wood was about to light the lamp, and nearly a minute had elapsed, when Richard laid the child in her lap, saying, “Mrs. Wood, take your child.” The little fellow then, for the first time, gave a few low sobs, as if relieved from a dread of injury. Mrs. Wood sat upon the opposite side of the room, fully twelve feet from her daughter. Whether the child was borne directly from one to the other, was led across the floor, or was floated around the room, it was impossible to tell, as all was silent while this was taking place, and the position of the child was undiscoverable in the total darkness, until laid in his mother’s lap. Had the medium or any one in physical form walked across the floor, the rustling of their dress must have been heard, and the floor of the room felt to vibrate, as it did when any one of the circle moved across it. Why the child should not have expressed its alarm, by crying, while away from his sister and mother, and only did so after he reached his mother, is not the least singular incident of that occurrence. It is due to the parents of the child to say that he was accustomed to sitting in similar circles, and showed as much interest in them as the older members of the family did. The child frequently during that séance appeared to see the spirit forms present, when none of us could see anything, and not being able to talk intelligibly, would say, “See!” “see!” as one or another spirit would manifest to us by sounds.

At the second séance of the series, the manifestations in the dark circle displayed unusual power in the producing intelligences. Similar manifestations to those related were going on, when suddenly a heavy body struck the floor, shaking the house and startling all present. A moment afterwards the room rang with a loud aiai terrifying yell or whoop. Mrs. Holmes was as much startled as the other ladies, and ran over to Mrs. Wood, to wham she clung; protesting aloud that she would leave the house if the occurrence was repeated. As if defying her, again and again the same thing was repeated. The sound was <... continues on page 1-26 >