Her Experience—Her Opinion of American Spiritualism And American Society
< source: Spiritual Scientist , vol. I, pp. 148-9 notes: Could be reprinted in London Spiritualist, 13.12.1874 >

From a letter received from Mme. Blavatsky last week we make the following extracts, want of space alone preventing us from publishing it entire. It is written in her usual lively and entertaining style, and her opinions expressed are worthy of careful study, many of them being fully consistent with the true state of affairs. She says:

As it is, I have only done my duty: first, towards Spiritualism, that I have defended as well as I could from the attacks of imposture under its too transparent mask of science; then, towards two helpless, slandered “mediums”—the last word becoming fast in our days the synonym of “martyr”; secondly, I have contributed my mite in opening the eyes of an indifferent public to the real, intrinsic value of such a man as Dr. Beard. But I am obliged to confess that I really do not believe in having done any good—at least, any practical good—to Spiritualism itself; and I never hope to perform such a feat as that were I to keep on bombarding for an eternity all the newspapers of America with my challenges and refutations of the lies told by the so-called “scientific exposers.”

It is with a profound sadness in my heart that I acknowledge this fact, for I begin to think there is no help for it. For over fifteen years have I fought my battle for the blessed truth; I have travelled and preached it—though I never was born for a lecturer—from the snow-covered tops of the Caucasian Mountains, as well as from the sandy valleys of the Nile. I have proved the truth of it practically and by persuasion. For the sake of Spiritualism I have left my home, an easy life amongst a civilized society, and have become a wanderer upon the face of this earth. I had already seen my hopes realized, beyond the most sanguinary [sic] expectations, when, in my restless desire for more knowledge, my unlucky star brought me to America.

Knowing this country to be the cradle of modern Spiritualism, I came over here from France with feelings not unlike those of a Mohammedan approaching the birthplace of his prophet. I had forgotten that “no prophet is without honor save in his own country.” In the less than fourteen months that I am here, sad experience has but too well sustained the never-dying evidence of this immortal truth!

What little I have done towards defending my belief, I am ever ready to do it over and over again, as long as I have a breath of life left in me. But what good will it ever do? We have a popular and wise Russian saying that “one Cossack on the battlefield is no warrior.” Such is my case, together with many other poor, struggling wretches, every one of whom, like a solitary watch, sent far ahead in advance of the army, has to fight his own battle, and defend the entrusted post, unaided by no one but himself. There is no union between Spiritualists, no “entente cordiale,” as the French say. Judge Edmonds said, some years ago, that they numbered in their ranks over eleven million in this country alone; and I believe it to be true, in which case it is but to be the more deplored. When one man—as Dr. Beard did and will do it yet—dares to defy such a formidable body as that, there must be some cause for it. His insults, gross and vulgar as they are, are too fearless to leave one particle of doubt that if he does it, it is but because he knows too well that he can do so with impunity and perfect ease. Year after year the American Spiritualists have allowed themselves to be ridiculed and slighted by everyone who had a mind to do so, protesting so feebly as to give their opponents the most erroneous idea of their weakness. Am I wrong, then, in saying that our Spiritualists are more to be blamed than Dr. Beard himself in all this ridiculous polemic? Moral cowardice breeds more contempt than the “familiarity” of the old motto. How can we expect such a scientific sleight-of-hand as he is to respect a body that does not respect itself? We ourselves brought upon our heads that shower of abuse lavished by his hand with the dexterity and ability of a drunken London cockney.

My humble opinion is, that the majority of our Spiritualists are too much afraid for their “respectability” when called upon to confess and acknowledge their “belief.” Will you agree with me, if I say that the dread of the social Areopagus is so deeply rooted in the hearts of your American people, that to endeavour to tear it out of them would be undertaking to shake the whole system of society from top to bottom? “Respectability” and “fashion” have brought more than one utter materialist to select (for mere show) the Episcopalian and other wealthy churches. But Spiritualism is not “fashionable,” as yet, and that’s where the trouble is. Notwithstanding its immense and daily increasing numbers, it has not won, till now, the right of citizenship. Its chief leaders are not clothed in gold and purple and fine raiments; for not unlike Christianity in the beginning of its era, Spiritualism numbers in its ranks more of the humble and afflicted ones, than of the powerful and wealthy of this earth. Spiritualists belonging to the latter class will seldom dare to step out on the arena of publicity boldly proclaim their belief in the face of the whole world; that hybridous monster, called “public opinion,” is too much for them; and what does a Dr. Beard care for the opinion of the poor and the humble ones? He knows but too well, that his insulting terms of “fools” and “weak-minded idiots,” as his accusations for credulousness, will never be applied to themselves by any of the proud castes of modern “Pharisees”; Spiritualists, as they know themselves to be, and have perhaps been for years, if they deign to notice the insult at all, it will be but to answer him as the cowardly apostle did before them, “Man, I tell thee, I know him not!”

St. Peter was the only one of the remaining eleven that denied his Christ thrice before the Pharisees, that is just the reason why, of all the apostles, he is the most revered by the Catholics, and has been selected to rule over the most wealthy as the most proud, greedy and hypocritical of all the churches in Christendom! And so, half Christians and half believers in the new dispensation, the majority of those eleven millions of Spiritualists stand with one foot on the threshold of Spiritualism, pressing firmly with the other one the steps leading to the altars of their “fashionable” places of worship, ever ready to leap over under the protection of the latter in hours of danger. They know that under the cover of such immense “respectability” they are perfectly safe. Who would presume or dare to accuse of “credulous stupidity” a member belonging to certain “fashionable congregations”? Under the powerful and holy shade of any of those “pillars of truth” every heinous crime is liable to become immediately transformed into but a slight and petty deviation from strict Christian virtue. Jupiter, for all his numberless “Don Juan”-like frolics, was not the less considered for it by his worshippers as the “Father of Gods”!

In one of the numbers of the Buda-Pesth Society’s Reflexionen, a communication is reported, alleged to have been given by an order of beings who say that they live in the woods, in the sunbeams, in flowers, in dew, in water, and in the mist. One signs itself the “heat-spirit,” whose office it is to distribute warmth, to aid in the production of life, in the growth of plants, the ripening of fruit. This class of spirits know nothing of earthly wisdom and achievements; the names of all men are alike to them; they only know of the elements and forces among which they dwell. The male principle of heat is said to be light; the “heat-spirit” is female to the “light-spirit.” The “storm-spirits” are borne hither and thither on the wings of the wind; they clarify and purify the atmosphere, driving out the damp, mephitic, vaporous spirits. Christ could still the tempest, because the “storm-spirits” were subject to Him. The “air-spirits” are gentle, beneficent beings, the spirits of tender women. All nature derives its life from these spirits, who correspond to the nymphs and naiads of the Greeks, and the gnomes and elves of the Teutons and Scandinavians. Bad spirits dwell in swamps and morasses, and cause malaria, resulting in cholera, ague, and infectious diseases. 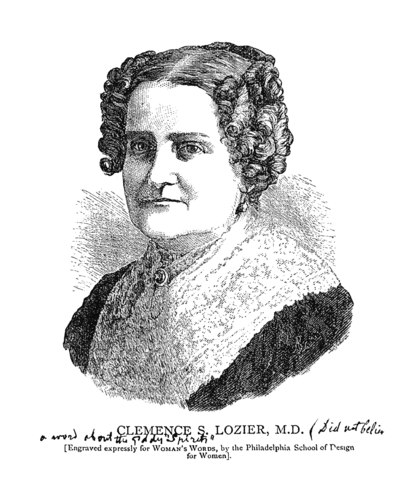 CLEMENCE S. LOZIER, M.D.
(Did not believe a word about the Eddy “Spirits”
[Engraed expressly for Woman’s Words, by the Philadelphia School of Design for Women]
Retrieved from "https://en.teopedia.org/w-lib/index.php?title=HPB-SB-1-9&oldid=1789"
Categories: