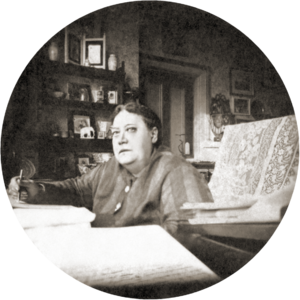 Helena Petrovna was amazingly hard-working person. This quality was noted by her biographers and is obvious to anyone who knows her literary heritage left to us for study.

It is well known that she liked to sign her works (especially the later ones) only with the initials, H.P.B., making a difference between this signature and a more complete one. So, in her own copy of The Voice of Silence, she clearly emphasizes this difference, having signed with the following words: “Н. Р. В. to H. P. Blavatsky with no kind regards”.

According to this signature and some other signs, one can make the assumption that under H.P.B. Helena Petrovna meant her higher Self, or at least the inner human being, the Mahatmas’ disciple, who strove to merge with her higher Self. Unlike her external representative, quite irritable, sometimes rude and having a number of shortcomings, inherent qualities of many human beings, this internal one was self-disciplined, purposeful, noble, compassionate and devoted to her cause to such an extent that only a few are able to reach.

To better understand what Helena Petrovna was like, let's try to distance ourselves from H.P. Blavatsky and pay more attention to H.P.B. That is, we will try to recognize the individuality under the personality. It is not easy to do, since the latter always manifests itself through the former. However, it is still possible if we remember that the concept of "mission" refers precisely to individuality. It is the mission or life task that our immortal self needs to carry out during the current incarnation.

Helena Petrovna herself considered the theosophical work her life mission. It includes writing books and articles, communication with different people, the foundation of the Theosophical Society, as a visible representative, or the manifested personality of an unmanifested and eternal individuality - the ideas of Theosophy.

Let's plunge a little bit into the atmosphere in which H.P.B. appeared among others and did her work, manifesting herself.

Just as on stage, where the scenery is designed to make the impression of actor’ words deeper, to create the necessary atmosphere for a proper understanding of the situation, so we will try to imagine the environment in which H.P.B. worked. 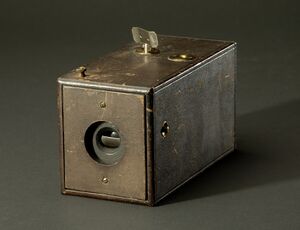 W. Q. Judge published a series of articles in “The Path” entitled “Habitations of H.P.B.”, where he described several such places. The above photograph was taken in 1888 on 17 Lansdowne Road. Judge himself photographed, having leased a professional Kodak camera for that purpose.

Commenting on this photo Judge draws attention to its uniqueness with the following words:

“All pictures of Mme. Blavatsky except this and one other were taken at set times, either in the shop of the photographer or at Conventions and other meetings. But none were obtained of her as she paused in her work until in 1888 this little photograph seized her, after consent, just as she was beginning the day’s work on Lucifer, then in its babyhood.”

At this table, according to Judge, “most, if not all, of The Secret Doctrine was written”.

In her hand we can see an American Gold pen given to her by a New York theosophist and made by John Foley, well known to the writers of the time for his quality pens.

In the foreground there is one of the sheets of the MSS of The Secret Doctrine, and in the background there are many photographs of friends, disciples and admirers with whom Helena Petrovna loved to surround herself. She arranged them on the shelves and ingeniously framed and hung up herself.

She loved to wear the old wrapper (that we can see on her) more often than gowns of state, despite the fact that they were prettier.

In addition to photography, William Judge made several sketches of the house and the room, showing himself as a very talented artist. The surviving photographs show how accurately and in detail he managed to convey what he saw.

According to Judge's description, H.P.B.’ work room at 17 Lansdowne Road overlooked a courtyard shared by several of the surrounding houses. Folding doors divided her work room and the front one. When Helena Petrovna turned from her desk, she could see through the opened doors the following:

In the far corner, on an easel, there is a portrait of “her Master” – as she often said. There is a little round table in front of the sofa, which were used very often in the mornings for holding a frugal breakfast, for H.P.B. was always up and at work very early each day.

There is also a photograph from this angle, although its quality leaves much to be desired. 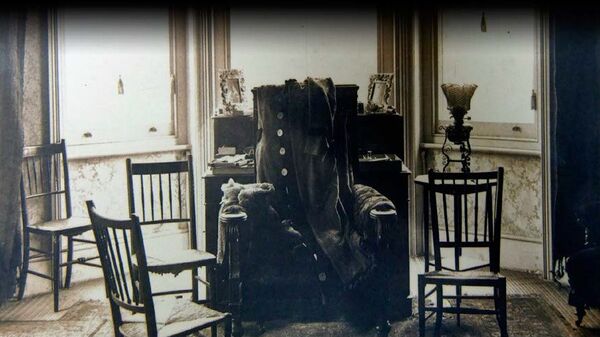 During Lodge meetings, Helena Petrovna sat at the garden end of the room, in the green plants corner, so to speak. Lodge President G.B. Finch sat next to her, and the others occupying seats around them.

How did HPB's numerous guests see the house on 17 Lansdowne Road (and it was attentive and wise H.P.B. to whom people were attracted, but not to the irritable and unfriendly H. P. Blavatsky)?

William Judge sketched the house in the condition when Helena Petrovna lived there. Unfortunately, we do not have a photograph of that time, but there is a photograph of the mid-20th century. We can see in it the building after a small restoration with the rebuilt front entrance and the added annex to the right, as well as the removed stone fence, but the building is still easily recognizable. 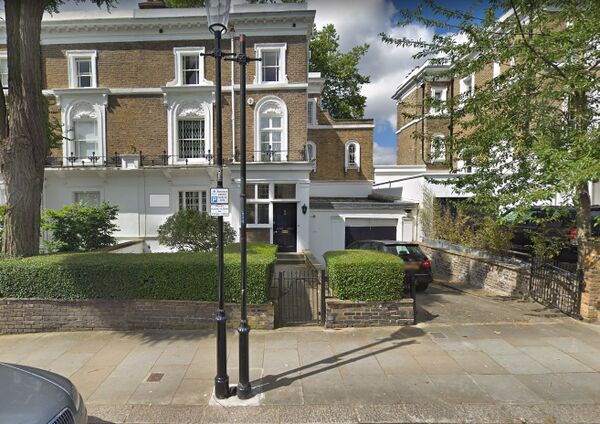 It is interesting to note that in London there are three different places, quite distant from each other with the same address: 17 Lansdowne Road. But we know that the house in which Helena Petrovna lived is located near the Holland Park. And it is more remarkable that this house is located not far from Hyde Park, the very park where Helena Petrovna had a fateful meeting with her Master Morya. 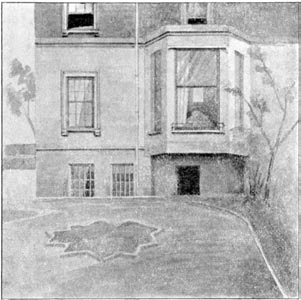 The view from the courtyard allows us to see the windows of H.P.B.'s work room, in front of which she spent many hours of thinking and meditation. One can imagine how she looked through these windows, but often she did not see the courtyard, but various places significantly removed from this corner of London both in distance and in time.

H. P. Blavatsky rarely left the house during her last years, but she did not experience a lack of communication. Many guests visited her all the time. When she was alone and outer life did not distract her, Helena Petrovna Blavatsky turned into H.P.B. and selflessly deeply dived into correspondence, editing articles, writing instructions and explanations. Which means that she became herself – that torch that illuminate the minds and souls of all who are ready to perceive her light.

P.S. Many thanks to the American Theosophical societies (both Adyar and Pasadena) for the images provided.