Sow the seeds, they will grow somewhere. This very thought has its effect in the case of spreading knowledge of theosophy.

Can postage stamps and envelopes as one of the ways to promote theosophical ideas be that starting point to follow the way of nurturing the divine seed in a man?

I suppose we could provide a positive response on the condition that we find images connected with the Theosophical Society and theosophical ideas on those stamps and envelops. This is one of the ways to use the visual images to transmit various ideas.

Everyone can get a stamp, stick it on an envelope and send a message to the most distant parts of the world. Having seen the picture on the stamp the recipient of the letter might get interested in the event or a person depicted on the picture. And this can become a certain point in a search for the purpose of human life and its values.

Nowadays the print run of regular post office stamps usually equals to approximately 10 000 copies and they are sold all around the world. It is really true that letter writing has declined greatly as a form of communication in recent years. People no longer take time to sit down and write family and friends letters.  Nowadays we have a free access to the Internet in many countries of the world and exchange emails but there are still places on our planet where its services are unavailable though post services still do their job. Besides every video or any other web resource or even a web-site can be removed from the net. But an image of some historical personality or event on a stamp may have a prolonged effect as it is a material object.

Today I would like to present you some slides which will show you the stamps and envelopes dedicated to the Theosophical Society and its activities.

At picture 1 you can see a stamp showing the Headquarters of the TS in Adyar (Chennai). It was issued before 1947 when leaders of Indian Independence Movement were trying to put an end to the British rule in the country. Perhaps this might be one of the first stamps on this topic. 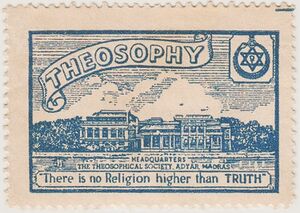 At picture 2 you can see a stamp cancelled with the seal of the TS in 1936. Somebody got a message and saved a stamp with it. 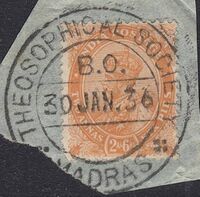 In the centenary year of functioning of the TS a new stamp appeared in India. It was issued on December, 20th in 1975. The centenary Convention of the TS in Adyar was held that day. The president of the TS was John Coats and he believed firmly that the Society must reach out to the public and cooperate with allied organizations in order to promote the cause of brotherhood and human development. The emblem of the TS on the stamp is surrounded by three coloured circles and there is the motto of the Society: “There is no religion higher than truth.” 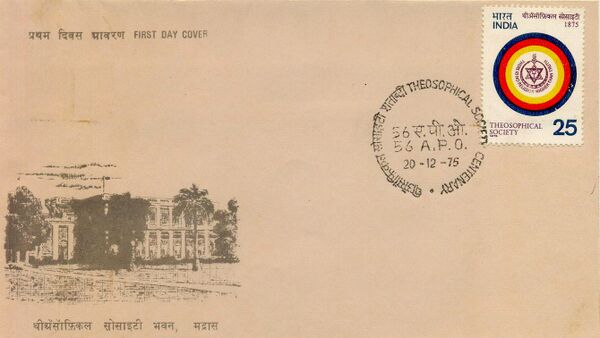 It is a well-known fact that people from Sri Lanka pay a great respect to H.S. Olcott. In 1967 a coloured stamp was issued in the country to commemorate Olcott’s 60th death anniversary (picture 4-5). His contribution towards the revival of Buddhism in Ceylon is one of great significance as well as efforts to develop public education. The date of his first arrival to the island can be seen on the stamp, it was on May, 17th in 1880 and his last visit to the country dates back to December, 8th in 1906. 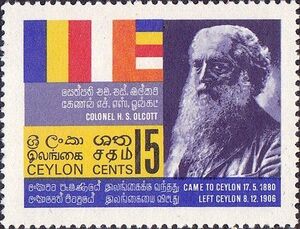 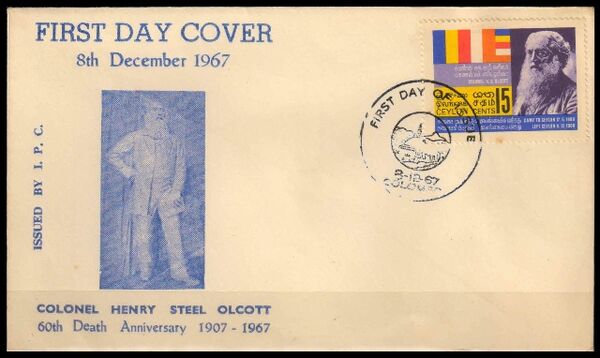 The next stamp (picture 6) depicting Colonel Olcott was issued on May, 17th in 1980 to commemorate a centenary jubilee of his arrival to Sri Lanka. At this journey in 1880 he was accompanied by H.P. Blavatsky. 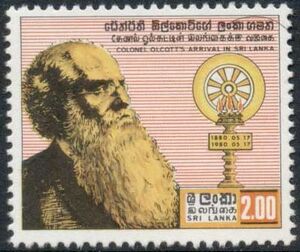 These stamps show that people from Sri Lanka treasure the memory of this prominent theosophist, a close associate of H.P. Blavatsky.

In 1963 India issued a stamp dedicated to Annie Besant, the second International President of the Theosophical Society. She became the brightest representative of Theosophy, both as an orator and author. Annie Besant took an active part in Indian Independence Movement, established several schools for children in India and involved women into the movement wherever possible. 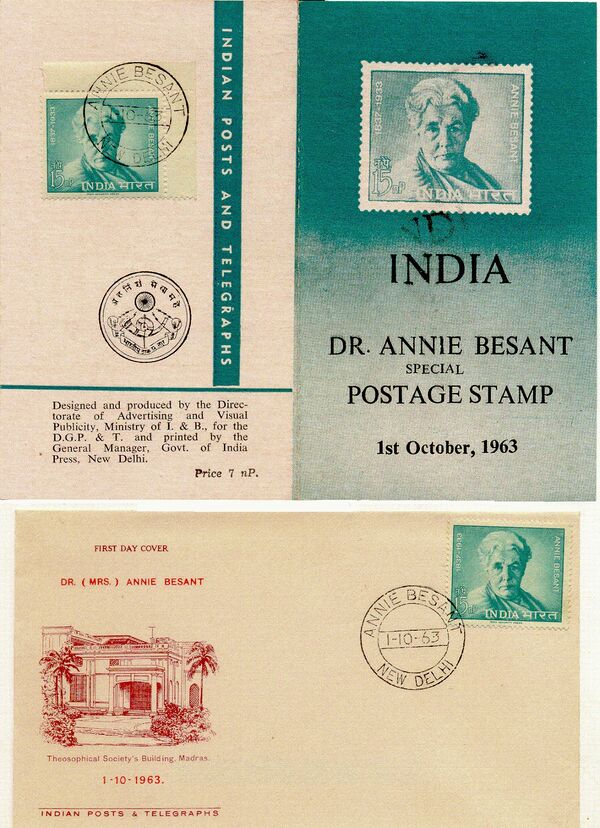 The next stamp (picture 8) shows J. Krishnamurti. The stamp was issued in India in 1987. Jiddu Krishnamurti is acknowledged all over the world as one of the most outstanding teachers of spirituality of the modern age. The considerable part of his life was connected with the TS and Annie Besant. 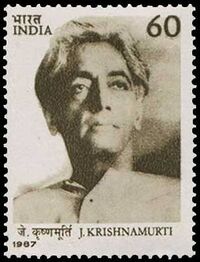 At the next picture (picture 9) there is a stamp with the image of George Sydney Arundale who was the third President of the Theosophical Society from 1934 to 1945. He was a dynamic and inspiring leader, closely associated with Annie Besant in her many-sided work. The stamp was issued in the USA in 1937. 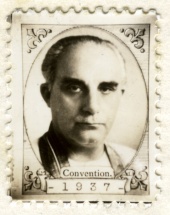 The next stamp at picture 10 is devoted to his wife Rukmini Devi Arundale. She established the International Academy of Arts in 1936 to revive and develop the ancient culture of India. 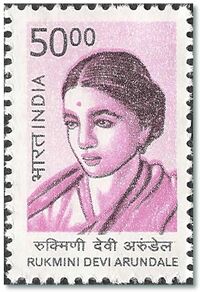 At the next picture you can see a postcard issued in the USA by the Theosophical Society in America. The picture represents the Headquarters of this Society in Wheaton, Illinois State. The American theosophists have held their meetings here since 1940. There is a unique library there which comprises the religious, philosophical, and spiritual books of the Ancient Wisdom tradition. It was founded in 1926 and named after Colonel Henry Steel Olcott. 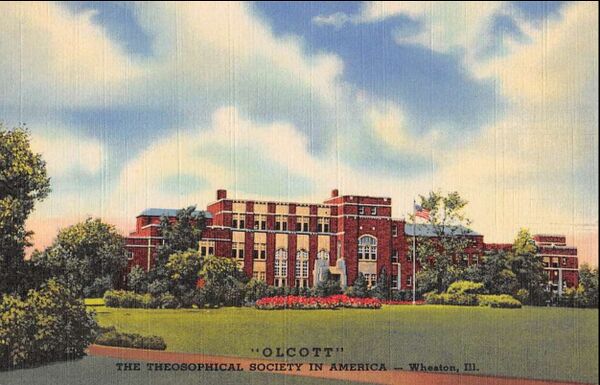 When the Theosophical Order of Service celebrated its worldwide centenary in 2008, the Kenyan government issued a stamp in recognition of its hundred years of service (picture 12). The TOS Centennial post stamp was officially launched on November, 17th in 2008 by a Kenyan Minister at a packed event held at the TS premises in Nairobi (picture 13).

The TOS helped the Kenyan Water Project to bring water to communities in the arid and semi-arid parts of Kenya. The TOS donated to put in a borehole, a water pump and a storage tank in one of the villages in 130 km east of Nairobi. Shortage of water is a very serious problem in Kenya and it is solved in different ways. 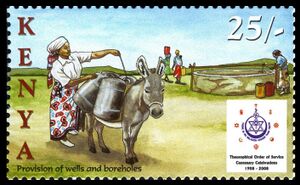 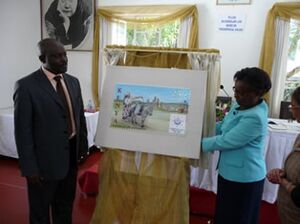 An envelope with an image of H.P. Blavatsky was issued in Russia in 2011 on the initiative of Siberian Roerich Society to commemorate her 180th birthday (picture 14). You can see this famous portrait of H.P. Blavatsky and a quotation from one of her writings: “I have pledged my word to help people on to Truth while living…” 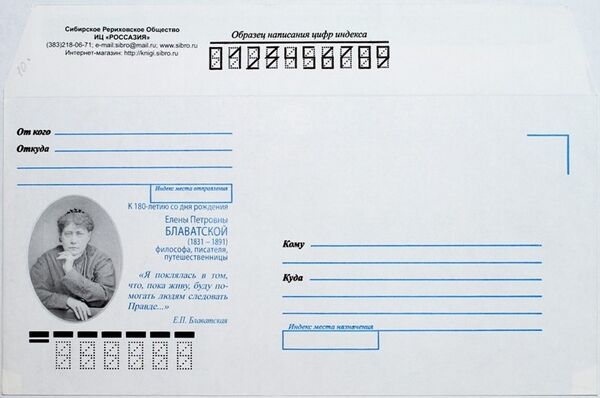 A stamp depicting a portray of E.P. Blavatsky was issued by Ukrainian theosophists as a souvenir stamp in 2016 (picture 15). It was devoted to the 185th anniversary of her birthday. 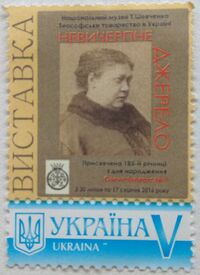 I hope that this short review of the stamps connected with the life of TS might help you find some new information about the Society.

Will another post stamp devoted to H.P. Blavatsky be issued soon? I hope so... Perhaps it may happen in Russia, or in Ukraine, or in India or in some other country. It is a well-known fact that water never flows under settled stones so we should make an effort and take certain steps in this direction.

Philately is one of the ways to popularize theosophical ideas and to convey the theosophical point of view as it has certain powers to unlock one’s spiritual potential.