Sir, — A belief in the existence of elementary spirits has been held all along by the followers of Allan Kardec ; and the question seems to me to be, not so much whether they are “ spirits other than those of human origin,” as laid down by the modern Occultists, according to your correspondent, an English member of the Theosophical Society; but whether they may not be in one of the phases of the origin of human beings ? In other words, whether we may not have been, once upon a time, elementary spirits ourselves. The three questions, 1st, That of men being “sparks struck off from Deity itself,” as alleged in ‘Spirit Teachings,’ and in other articles of The Spiritualist; 2nd, The question of elementary spirits; and 3rdly, That of the incarnation and reincarnation of spirits. These three questions have all cropped up lately in such quick succession, and in such intimate connection with each other as to give Spiritualists new sources for thought, and perhaps for guidance; just as their perplexities were becoming almost equal to their knowledge and their progress; stupendous as, indeed, were some of the phenomena and scientific results attained by them. But what about these “elementaries” who appear to be, some of them, as inconsequent and as selfish as can be well conceived, and what is more, to all appearance, sometimes utterly unsympathetic, hardhearted and treacherous towards their mediums; like the wolf, of which the poet sings —

Nor lodges pity in his shaggy breast.

Like the infant, who, on his mother’s bosom, the medium through whom he draws his substance and his strength, meets the suffering he sometimes causes her with a smile? What about these but that we learn, by analogy, that life is an education, and that all must he ignorant, weak, foolish, and inconsequent, if not unfeeling and brutal, before they can he wise, and that knowledge comes but rarely by intuition? It appears, according to the spiritual law of progress, that all must gain wisdom for themselves, however long they may be about it; so that when perfect felicity comes with wisdom at length and for ever, they may feel that they have learned good from evil by the physical and moral sweat of their own brows.

The second proposition of the Occultists, as quoted by your correspondent, which alleges that “the human will has power to control certain classes of these spirits,” shows the very close connection that exists between Spiritualism and magic; for that a magician may control and be assisted by spirits without his even believing in them, is more than probable, and that the movements of spirits are not confined to magic or to Spiritualism, as we understand the latter, we may rest assured.

There is, however, one sensible difference between a magician and a medium, as spoken of in modern terms. Whatever may be the advantages of the medium over the magician in many respects, in one the magician is the superior. The magician controls his familiar spirits, while the medium proper is generally controlled, though it is quite possible (since we find that certain conjurors have now turned mediums) that they were passive mediums all along, and were really the controlled when they were playing the part of the controllers, just as a servant in a comedy sometimes, by command of his master, takes his master’s place. That spirits, to be controlled at all, must be of a low order, none can doubt; but that some magic men, even of the present day, have strong wills, combined with medium power, which in conjunction fit them for this work, we can hardly question.

M. Kardec says in Ciel et l’Enfer (Heaven and Hell), p. 185: — “There is no method of compelling a spirit to come to you against his will so long as he is your equal or your superior in morality, for you have then no authority whatever over him. If he is your inferior you can compel him to come, if it be for his good; for in that case other spirits give you their assistance.” May we not then hope that some of the conjurors may, by their superior moral attainments, greatly benefit, in a moral sense, those of their familiars whose talents they so frequently hold in requisition, in return for the very material help given them by the latter?

I once heard a conjuror ejaculate words which, being interpreted, meant, “Infernal spirits obey.” He spoke these words in his own language on an English platform, and their result was the phenomenon of matter passing through matter, and this occurred whenever these words were pronounced in a well lighted room. For “infernal” let us supplement the term “elementary,” and perhaps we have gained the key note of magic.

I once heard a conjuror, in the south of France, tell his audience that strange objects which they unexpectedly found in their pockets were placed there by the spirit of his grandfather. This observation caused much laughter, hut I put down that fact also on the tablets of my memory, for this last magic man was not contented with “elementaries,” he went higher up the spiritual ladder than that, and many a truth is spoken in apparent jest.

M. Kardec was quite in accord with the Occultists as regards the lack of reasoning qualities in elementary spirits. He called them “primitive spirits” — esprits primitifs — and in his Ciel et l’Enfer, p. 343, we find the following: — “An entirely primitive spirit would be but slightly accessible to reason; but it is quite different in the case of those spirits who have had life experience.” "While, in drawing a distinction between magic and Spiritualism, in answer to an attack from the Cardinal Archbishop of Eheims, in the year 1865 (for the Archbishop of Toulouse, who wrote against Spiritualism a year or two ago, had been anticipated by the above-named prelate in high clerical denunciation against the new heresy), M. Kardec says, in p. 158 of Ciel et l’Enfer, “Magic, by the aid of its formularies and cabalistic agency, had the reputation of revealing secrets and working wonders, through constraining spirits to bow to the will of men, for the satisfaction of their desires.” “But now-a-days,” he adds, we know that spirits are only the souls of men; we call them solely for the purpose of receiving good counsel from them, or with the view of giving good counsel to the unprogressed among them, or through a desire to continue our rapport with beings whom we love.” Primitive spirits, we may suppose, he regarded as spirits of men in embryo, when, he said, “spirits are only the souls of men.”

The fun begins in England
[2]

Sir, — Mr. C. C. Massey makes an important omission in his account of our séance with Dr. H. Slade, in this city, on the evening of October 14th, which I beg to supply. He describes the direct writing obtained when the medium and I held the slate under the edge of the table, and when the pencil was laid upon the table and the slate covered it over, and no one touched it. But we made one other experiment which I regarded as peculiarly satisfactory. I placed the pencil between Mr. Massey’s two new slates, and held them in my own hand, at my right side—away from Dr. Slade and next to Mr. Massey—and the writing was obtained as easily as before. As I have no mediumistic power whatever, and as under the circumstances deception was impossible, it is a fair inference that the force exerted by or through Slade can operate for the production of written messages independently of his personal contact with the thing to be written upon.

I have had the same phenomenon occur in the presence of other persons similarly endowed; as, for instance, where pencil writing has come upon the under-side of a card upon whose face I was scribbling at the time, and inside a note-book placed in my bosom to try the experiment. I have also, in more than twenty cases, found the familiar writing of a certain spirit friend inside letters delivered to me by the postman, upon my opening the envelopes—the letters coming from correspondents in various parts of the world, and some from persons who knew nothing and cared less about Spiritualistic phenomena.

In Lane’s Modern Egyptian you will find an account of the experience which two visitors had with a famous sheikh, part of which bears upon this question. One of them desired an answer to a sealed letter, which he handed the sheikh and which was addressed to his own father, then living in a place far distant from the locality when the seance was occurring. The sheikh placed the letter behind one of the cushions of his divan, and shortly after turning down the cushion the visitor found his own letter gone and another addressed to himself, in his father’s familiar handwriting, replying to his questions and giving him unsought information about things that moment transpiring at home.

Once this happened to me. I wrote a letter to a dear friend of mine who resided several thousand miles away from here—in India. I laid it, sealed, upon the mantel-shelf, where I could have it under my eye the whole time. In about an hour I looked and found my own envelope with unbroken seal, my own note inside, and inside that, and upon a sheet of coloured paper unlike anything in my own possession, and unlike anything that I ever saw letters written upon in America, teas a reply from my correspondent, in his own handwriting.

I might multiply stories of personal experience like this, but these will suffice to illustrate my point, viz.: That there are certain subtle forces, which can be controlled by will-power to produce written communications, even at great distances. Now, what are these forces, and how does will-power control them? Can any Spiritualist, with only such knowledge as he has obtained in circles or through mediums, explain? They can give vague theories, but only theories. It is not pretended that the writing is done, like ordinary writing, by a spirit’s tracing the characters with ink or pencil. I have heard them say it is a chemical effect; but how produced, pray? Some time since I sat with the President of the Photographic Section of the American Institute, to witness the slate writing of a certain Doctor Cozine, which is far more wonderful than Slade’s. The communications came upon the slate in bright blue and red colours, and no pencil or crayon was used by us, and I held one end of the slate myself. In my own experience I have seen the writing in pastil, ink, lead-pencil, and slate pencil, to say nothing of the direct paintings of figures, flowers, and other objects on paper and satin; how are these done?

Another point I wish to call attention to. In your issue of the 26th ultimo, I read some very sensible talk by Mr. Jencken (as, indeed, <... continues on page 1-111 > 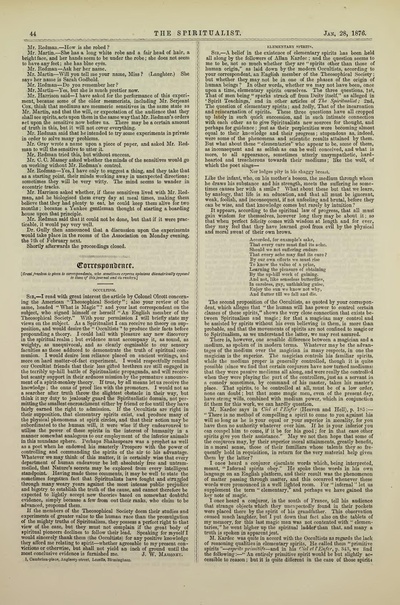 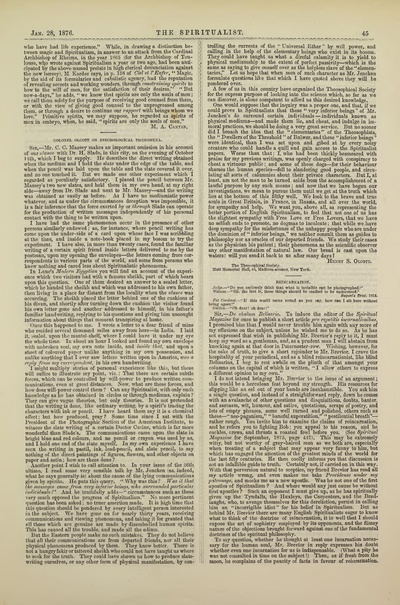